Home|There is a lot of Space in Italy|Italian Aerospace Excellence: Cygnus 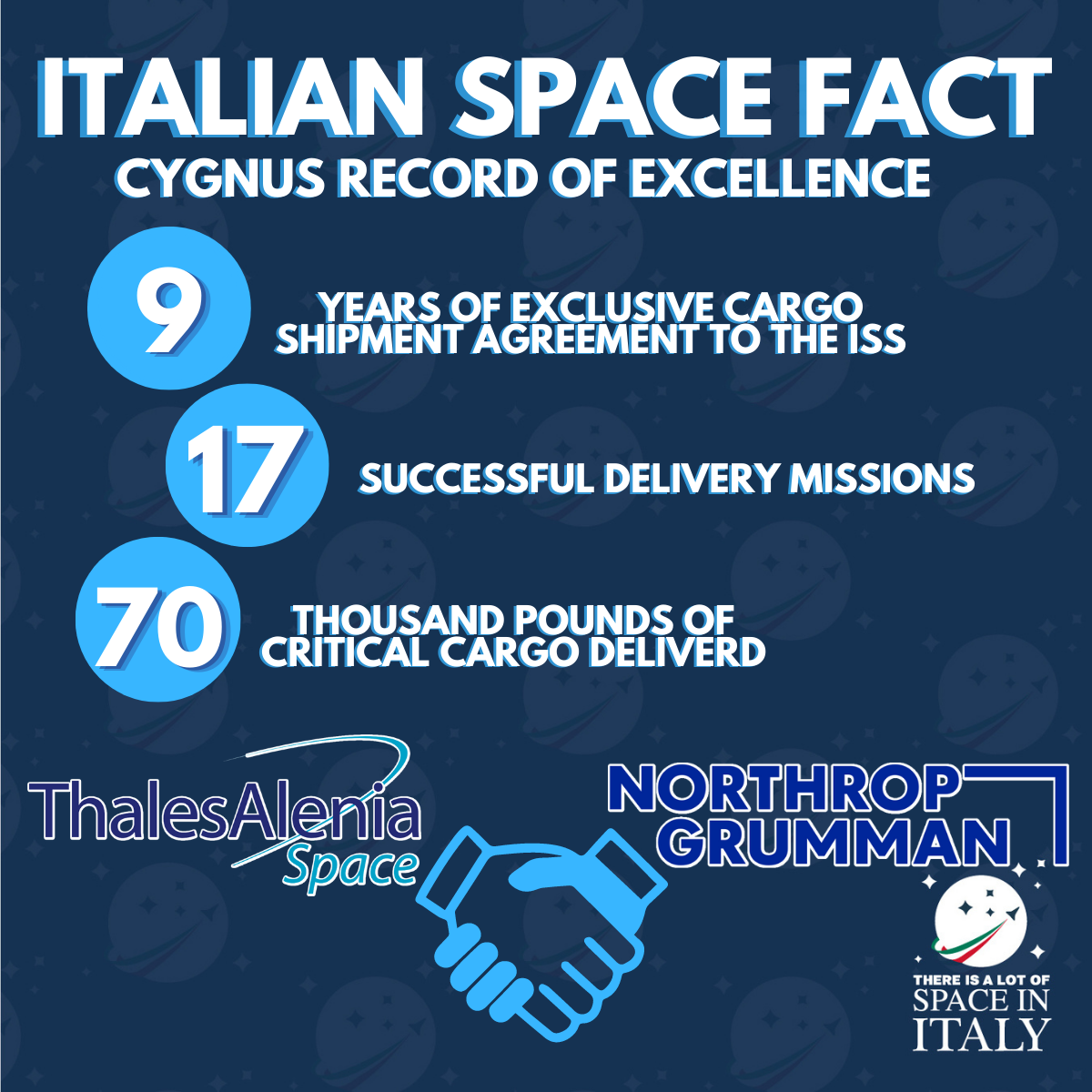 Thales Alenia Space (joint venture between Thales 67% and Leonardo 33%) is a true leader in Italian innovation in space (Rocketship). One of its several crown jewel projects is the ongoing Cygnus program, affirming its status as the exclusive provider of cargo logistics services and resources to the International Space Station. The project began in 2009 with the signing of a collaborative agreement between Thales and Norhtrop Grumman. Since its inception, the program has completed 17 successful cargo delivery missions to the #ISS, carrying over 70,000 pounds of critical supplies.

​Thales Alenia Space’s Turin plant is already producing the next three Cygnus Pressurized Cargo Modules: PCM-18 is undergoing advanced integration in preparation for a launch planned in August 2022, while both PCM-19 and PCM-20 are being assembled.

​Given Thales Alenia’s proven history and track record, it is an incredibly sought after and reliable partner of several dynamic aerospace players in the United States. Houston-based Axiom Space recently signed a development contract for two key pressurized elements of Axiom Space Station – the world’s first commercial space station. Scheduled for launch in 2024 and 2025 respectively, the two elements will originally be docked to the International Space Station (ISS), marking the birth of the new Axiom Station segment.

​Axiom Station will serve as humanity’s central hub for research, manufacturing, and commerce in Low Earth Orbit (LEO), expanding the usable and habitable volume of the ISS, attached to the ISS Node 2 module, built also by Thales Alenia Space. When the ISS is decommissioned, the Axiom modules will detach and operate as a free-flying, next-generation commercial space station, a laboratory and residential infrastructure in space, that will be used for microgravity experiments in-space manufacturing, critical exploration life support testing, and hosting both private and professional institutional astronauts. Axiom Space Station will be the cornerstone of a permanent, prosperous human presence and a thriving network of commercial activity in LEO, enabling new advances both on Earth and further out in space. The first two elements to be launched will accommodate up to 4 people each.

​The Italian Trade Agency is proud to celebrate not only continuous efforts of Thales Alenia, but those of *all* Italian aerospace companies across the peninsula and islands. You can discover every Italian aerospace company by downloading the complete catalog (200+ companies) here: https://www.asi.it/wp-content/uploads/2021/09/Catalogo-ASI_160921_LOW.pdf

Published On: August 5, 2022|Categories: There is a lot of Space in Italy|